I have been musing , thinking, reflecting, deliberating and all that about the Kinder Shores project and how the project has gone. It’s a social work skill that we could not survive without and I do it almost unconsciously after all these years. Leave aside the obvious new skills that I needed to learn there have been a number of interesting twists and turns to getting to this point in the project and they have probably left me with more questions than answers particularly about my profession.

Perhaps the most striking and saddest issue is the lack of enthusiasm displayed by my professional colleagues both as individuals and through their organisations. I must not include everyone in this of course. There were a few who supported the concert, bought the CD and have been very encouraging, these have mostly been people who I know personally or who I have worked with in the past. Many of those who have shown interest initially faded into the background or were moved to other jobs or went sick!  The local authority boss showed great enthusiasm but there was no downward communication and when I finally took to my car and drove round all the leaving care teams no one had heard anything about it!

The Public face of social work

The experience of visiting and getting access to these social work offices turned out to be a lot trickier that I imagined. To start with there was the barricaded office with the receptionist behind the grill who was not about to let me see anyone and told me to make an appointment to come back another day after another  40 mile round trip. I don’t think so…… eventually after some insistence or rather bloodymindedness on my part a charming social worker appeared. The office I didn’t visit I sent posters with no response not even an acknowledgement. Then there was a council receptionist in some shared office who was not letting me in until I could tell her who I represented. Clearly my “I am representing myself” line was not at all convincing. But this was, I thought, the best , or do I mean the worst. The team I wanted was upstairs in shared council offices but  I was shown a telephone to one side in the reception area and told to ring a number in another town 40 miles away to access the people upstairs!! Just one receptionist was smiling , helpful and accessed the team who, though under great pressure, treated me with interest and respect. Now if I was a distressed 17 year old, whose social skills are poor and who is attempting to engage with someone to help them they would have been deterred so easily especially as it may have taken a good deal of courage to go into the office at all.  What happened to……. have a seat , do you want a drink and I’ll see if I can find someone to help you??? I left feeling that like the enemy, a danger to the organisation or its staff in some way and I am sure that young people or others seeking help would feel the same. The fact that the receptionist may wear corporate colours or a name badge really does not make up for being genuine in the wish to offer help. I totally get why some prospective clients may choose to “kick off”. Sadly this is a vicious circle and that will result in more bars and grills, and restrictions to access and of course the organisation could not be the ones at fault.

Not easy is the short answer as I am sure many others have discovered over the years. There is little sexy about homeless, difficult, addicted, mentally ill young people who the general public think should be grateful for their rescue from  their abusive childhoods and the chances they have been given. I guess there is also a section of the public who feel that they get given too much and that somehow the whole mess is their fault. To be fair most people do not understand the terminology that we use around the care experience and confuse it with young carers, carers of the elderly  and so on. So it is a real challenge to make  anyone part with hard earned cash especially when they also feel that they are having to pay again for something which should be properly funded from their council tax. I may not have marketed this well this time so next time I think I will raise money for starving animals! An equally deserving cause before anyone gets upset.

All the social workers I finally met after breaking through reception were interested and engaged with the charity proposal no matter how many emails there were demanding their attention elsewhere. I was greatly cheered by this but equally there was a sense from them that they were not going to take it away into the organisation with any enthusiasm because there would be no point. When I tried to engage them with the idea of involving young people through  the In Care Council or by giving them the opportunity to talk to the public or do radio interviews with me there was no response . When I told one member of staff that I could get no response from the In Care Council the reply was “you never can” and a shrug. The response from another social worker to my wondering why the information had not been disseminated down to the teams was another shrug. There was no effort to suggest action about this just a corporate “whatever”. I am saddened by this feeling of depression or suppression of the social work spirit. I am sure the clients they work with must sense this too.

I have none. I am outside looking in these days. But I know that things have changed for the better in many areas but at the expense of morale, and a broken spirit. Some years ago I can see that the child care and leaving care  teams would have engaged wholeheartedly with this project, even if it was after hours, engaged the young people, and had lots of ideas to share.  But not now.  I do not have an answer to the broken spirit of social work sadly. But those who have engaged with this whole thing without question have been musicians and those working in the theatre industry, so the question I can answer is “Can you change lives through music” and the answer is very definitely  YES.

CD’s on sale from Amazon or Folk on the Pier 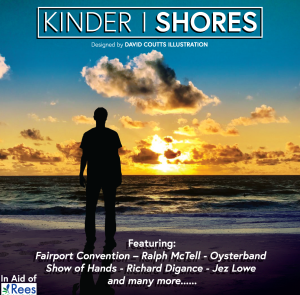